Gammon and Red Cabbage for 80 people in Cornwall

A very simple but popular meal for lots of people: boiled gammon, mashed potato, and red cabbage. It’s low-budget and can be done in advance. It doesn’t sound or look very glamorous but it’s surprisingly delicious.

For 80 people you need between 10 kilos (mean) to 18 kilos (very generous) of gammon, boneless to make carving easier.

Leave the string on during cooking. Weigh each piece so you have a rough idea of timings. Put the gammon in several large saucepans. You can put one on top of another but you don’t want them too near the top, as the liquid has to simmer all around the meat.

First cover the meat with water, bring to the boil, pour off and discard the liquid. This is to get rid of the salt. Then cover the meal in the cooking liquid of your choice. This can be coca-cola (very good), or even cherry cola (never tried it), ginger beer, or just plain water.

Put an onion, cut in half, into each saucepan. bring to the boil and then simmer. Cooking time 30 minutes per half a kilo. You can test to see if it’s done by sticking a knife in (should go in very easily) or even cutting a joint in half, if you’re going to cut it up to serve anyway.

At this point, for lots of people, i leave the ham to cool down then slice it up. But you canadd a glaze like this one and put it in the oven.

Don’t forget that cutting up meat for 80 people can take a while. 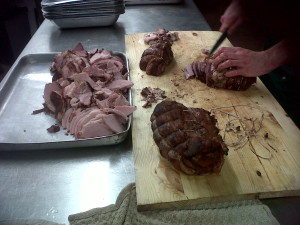 And it doesn’t look very elegant here, but served with mashed potato and red cabbage it’s delicious. Save the liquid and cook lentils in it. 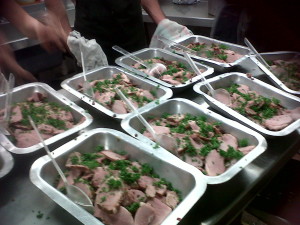 This entry was posted in Recipes for 20 or more. Bookmark the permalink.